The Palestinians responsible for the attack were killed during an early-morning shootout in one of Jerusalems most holy and sensitive sites.

The compound was closed for two days and reopened with the addition of newly installed metal detectors. Surveillance cameras were also eventually installed at the gates of the holy site.

Palestinians vowed to protest and prayed on the streets surrounding the mosque compound to voice their objection to the installation of metal detectors.

Tensions between Palestinians and Israelis over the Al-Aqsa Mosque compound have prompted the international community to call for calm and a restoration of the status quo, which gives Muslims religious control over the compound.

Indonesia, Jordan, Turkey, Lebanon, the US, Saudi Arabia, Egypt, and others expressed protest over Israeli-led restriction on Palestinians at the holy site.

Several Muslims from around the world joined the celebrations around Al-Aqsa and greeted each other.

On Saturday (July 29), thousands of Palestinians took to the streets and went into the Al-Aqsa Mosque after Israel lifted its restrictions on Muslim worshipers entering the mosque.

Following this, the Indonesian Association of Muslim Intellectuals (ICMI) called on world leaders to soon reach a decision on safeguarding Palestinians.

The ICMI views Israels actions as a measure to intimidate Palestinians.

ICMI Chairman Jimly Asshiddiqie stated that the problem should be addressed as a crucial issue not only of Muslims but also of the entire humanity.

"The Baitul Maqdis (Al Aqsa) is the legacy of the ancestors of three religions -- Islam, Christianity, and Judaism -- that should be safeguarded in the fight against the barbarity of the Israeli government," Asshiddiqie noted.

Al-Aqsa is mentioned in the Quran and is believed to have been the place towards which Muslims directed their prayers before it was replaced by Mecca.

It also features in one of Islams most important miracles: the Isra and Miraj, or the miraculous night journey of the Prophet Muhammad.

According to the Quran, Muhammad traveled from Mecca to Al-Aqsa in Jerusalem in one night before ascending to heaven.

The mosque, which is architecturally important and revered as a treasure of Islamic design, is also a defining symbol for Palestinians and the residents of Jerusalem.

With regard to the stance of the government of Indonesia, Asshiddiqie remarked that the ICMI hoped to be more aggressive and take an initiative to resolve the long-standing conflict between Israel and Palestine.

"I think we can work together with other countries, such as Turkey or Egypt, to take the initiative to mobilize global solidarity to solve the Palestinian problem," he explained.

Asshiddiqie said a coalition of world leaders can be formed, driven by Indonesia, the US, and countries from the Middle East and Europe, to resolve conflicts and immediately grant independence to the Palestinians.

"The US, as a predominantly Protestant Christian country, and Indonesia, as a Muslim majority nation, as well as other countries, in Europe, America, and the Middle East, can build an Abrahamic Coalition to solve the problems of Israel and the Palestinians," Asshiddiqie revealed.

He stated that humanitarian problems in the world, especially relations between Islam and the West, such as the Israeli-Palestinian conflict, could be resolved if world leaders, including US President Donald Trump, act neutral.

Commission I Chairman Abdul Kharis Almasyhari said that the Organization of Islamic Cooperation should urge the UN to completely end Israeli aggression against the sanctity of Al-Aqsa Mosque.

"The government of Indonesia should urge the UN Security Council to adopt a resolution to save the Al-Aqsa Mosque compound," he emphasized.

The UNESCO World Heritage Committee stated that the Al-Aqsa Mosque is an Islamic place of worship and an international cultural heritage site, he pointed out.

Hence, Israels actions at the Al-Aqsa Mosque should be stopped. 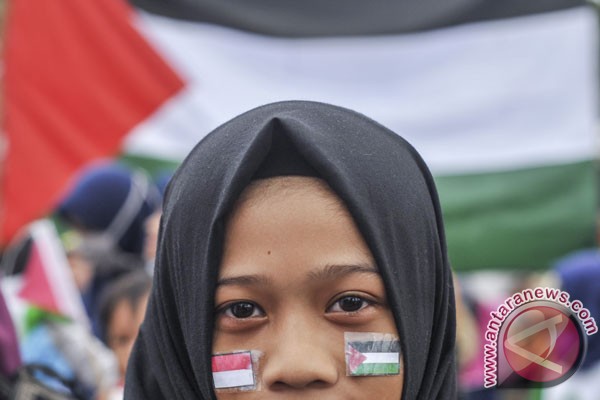 The Indonesian government will always support Palestines struggle for independence despite foreign pressure calling for Indonesia not to side with Palestine, Vice President Jusuf Kalla remarked.

"Indonesia will always side with Palestine," Kalla said.

Although support for Palestines struggle for independence has poured in, the Palestinian people must stay united to fight against the Israeli aggression, he stated.

He noted that the longstanding conflict between Hamas and Fatah will make it difficult for Palestine to gain independence.

"We continue to support their (struggle for) independence, provided that the rivalry between the two conflicting camps must be settled, and they must be united," he remarked.

The long-drawn conflict between Hamas and Fatah has led to a civil war in Palestine. As a result of the conflict, the Palestinian territory has de facto been divided into the Gaza Strip, controlled by Hamas, and the West Bank under the control of Fatah.

However, the recent Israeli attack, which targeted civilian settlements and the Al-Aqsa Mosque, has worsened Palestines struggle for independence.