Locals believe if you drink the water, you may return to Sebangau
A man in his 30s checks a motorboat's engine, while travelers board a vessel at Kereng Bekirai Port, one of the two only entrances to penetrate the peat forest in Sebangau national park, Central Kalimantan.

"It would take two hours to reach Mangkok resort," the man, a forest ranger and a motorboat driver, told the group of travelers comprising few peat experts and some national park officials as well as journalists.

The place he mentioned was a conservation camp-cum-floating guesthouse used by researchers and tourists to spend nights at the peat forest inside the national park. To reach the premise, the motorboat must pass a route lined with burned trees, whose reflection can be seen over Sebangau, the blackwater river. The bleak view was a result of regular bushfire that may arise every dry season, but it would turn into lush greeneries amid the rainy season. 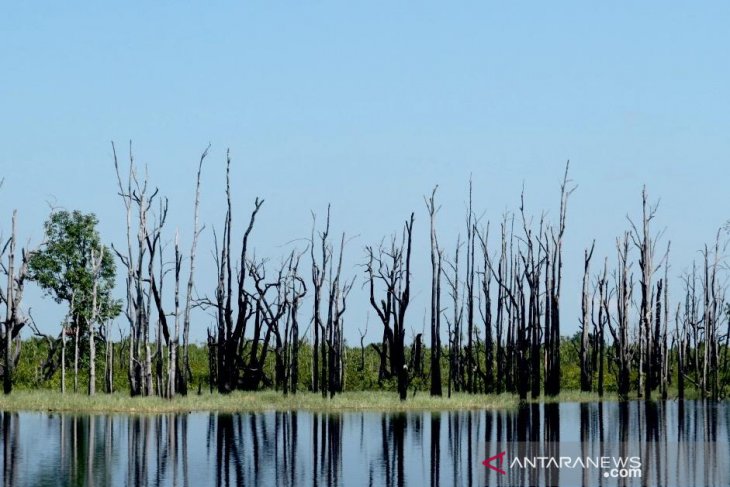 While everyone enjoyed their trip on a boat, the driver abruptly had to shut down the engine as the route to the resort was blocked by chains of two-meter-tall freshwater weeds floating in the middle of the river. The engine had to be turned off to make the vessel more stable when two rangers cut the weeds.

"It is a different kind of traffic here, with water weeds instead of cars, much better indeed," a boat passenger told the others, who responded with giggles.

After a series of weed cutting during the trip, the boat arrived at the resort where all construction is mostly made of wood. Inside the resort are three bedrooms, three shared bathrooms, a communal hall for dining and meeting, an office, a monitoring tower, and a greenhouse where seedlings are tested to be later planted inside the degraded area of the peat forest. Some of the seedlings include Jelutong tree (Dyera costulata), critically-endangered Red Balau or Balangeran tree (Shorea balangeran), and palm oil tree (Elaeis guineensis).


Once a degraded ecosystem


Under the New Order regime in the 1970s to 1990s, parts of naturally waterlogged Sebangau peat-swamp forest were cleared and drained for rice plantation as well as timber-concession land. As a result, a large number of canals were constructed for not only irrigation but also log distribution and transportation.

“The canal construction turned the peat forest into arid land. Once it was dry, it would be more susceptible to fires,” Nina Yulianti, a peat expert at the University of Palangkaraya, stated while trekking into the peat forest.


Before the national park was established in 2004, the Sebangau peat forest had endured several wildfires in 1992, 2994, 1997, and 2002. The wildfires in arid peat land could occur for months, and it might destroy the forest’s biodiversity, kill wildlife, spew dangerous haze, and later lower air quality in the island and region beyond.

However, since Sebangau was approved as the 49th national park in Indonesia by the Ministry of Forestry, several changes had been conducted to restore the ecosystem, some of which include the construction of more than a thousand canal blockings for rewetting the waterlogged ecosystem, reforestation, water level monitoring, routine patrol to crack down upon illegal loggers, and community development for populations inhabiting areas near the peat forest, Novianti Nugraheni, the national park’s official, stated.

“For decades, we put in extensive efforts in restoring the degraded ecosystem inside the peat forest, so it will be inhabitable for wildlife,” she expounded while appointed to look for Orangutan traces in the forest.

Yussaupin, the forest firefighter commander, has another approach to battle against wildfire apart from conducting a routine patrol inside the national forest.

“We have been instructed to be more persuasive while dealing with slash burners and illegal loggers. Instead of putting them in prison, we will give them a warning first and explain why their activities will harm us all. We expect they won't repeat their illicit activities inside the national park,” he stated.

“We have eight resorts inside the national park and each of them has 10 voluntary forest rangers as well as 10 community-based firefighters. They will help us, 16 forest police officers, to secure more than 500 thousad-hectare national park by conducting a routine patrol and tip us whenever they find any suspicious activities,” he expounded.

During a visit to the national park’s Mangkok resort, trekking for an hour inside the peat forest becomes mandatory for travelers, as they would see a large number of structures made of wood installed in mid of the canal to block waters flowing straight to the Sebangau River.

The structures, known as canal blocking, has been a miracle for a restoration effort in the peat forest as it helps in re-wetting the once-dried peat soils.

“Since 2005 to 2018, a total of 1,700 canal blocks had been constructed inside the peat forest. A single permanent canal blocking would cost Rp70 million,” Nugraheni stated.


Not only a diverse population of fauna, the Sebangau peat forest is also home to 809 species of plants, including the families of Rubiaceae, Myrtaceae, Euphorbbiaceae, Moraceae, Fabaceae, Cluasiacea, Cypera-ceae, Annonaceae, and Lauraceae, Hendro Sopha, head of the Mangkok resort, stated during a trip in mid-May 2018.

“Inside the forest, at least 223 types of plants can be used as medicines, including the Akar Kuning (Fibraurea tinctoria). A Dayak, an indigenous tribe inhabiting the Kalimantan Island, believes water boiled with the plant’s roots may cure hepatitis, malaria, and it may increase our stamina,” Sopha suggested.

Apart from humans that can derive benefits from the Akar Kuning tree, the orangutans also consume its fruits as snacks, he added.

“It tastes sweet and sour and when the Orangutan consumes the fruit, they would facilitate the dispersal of the plant’s seeds. By observing the trees, we will know how far the mammals have traveled inside the peat forest,” he remarked.

After an hour of trekking to the peat forest, travelers can rest in a semi-permanent canal blocking installed in the middle of the waterway. However, swimming in the canal is banned, as little information is available on the depth of the canal and the species inhabiting the water.

“You should taste the Sebangau’s blackwater. It’s cold and fresh, but slightly sour,” Sopha told the travelers joining the trip.

“Locals believe if you drink the water, you may return to Sebangau,” Sopha added.